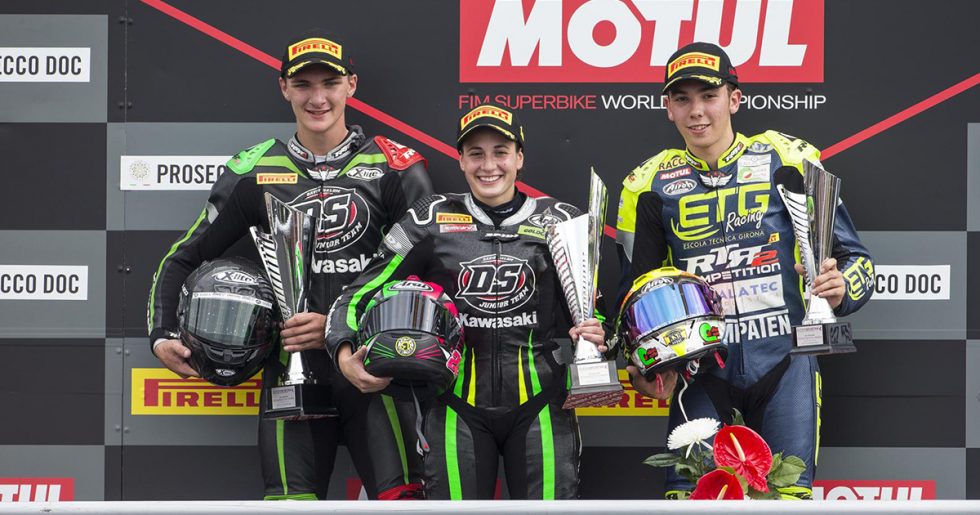 Spanish rider Ana Carrasco (DS Junior Team Kawasaki) continued her amazing run of recent form on the Ninja400 by scoring her second win of the year – and her second in succession – at Donington today. Scott Deroue (Motoport Kawasaki) was in the running for the podium place but overcooked it into the final entry of Foggy’s Chicane and ran off the track, dropping places and finally finishing sixth.

The exciting WorldSSP300 class delivered astounding entertainment and close racing once again, but for the second race in succession the main pack of riders was chasing Ana Carrasco’s shadow.

The first woman to ever win a full FIM World Championship road race event, she has now won three in her career, one last year two this season.

Carrasco took a clear lead and then a win by over 4.602 seconds from her own team-mate, Dorren Loureiro, from South Africa. Carrasco had also taken the Superpole award on Saturday, earning a pole position start for today’s 13-lap race.

There were four Kawasaki Ninja 400s in the top four places today, and five in the top six after Dutch rider Deroue’s luck ran out on him in the final quarter of the race, after some had passing and close quarter riding.

Borja Sanchez was the third Kawasaki rider on the podium on his ETG Racing Ninja, with Enzo De La Vega fourth on his GR Project Kawasaki.

Carrasco now leads the championship by an extended margin of 22 points, from Luca Grunwald, 73-51. Deroue is still third in the title hunt with 46 points in all, with Sanchez and Loureiro ranked fourth and fifth, and just four points behind, with 42 points each.

Brno in the Czech Republic will host the next round with raceday on Sunday the 10th of June.

Ana Carrasco, stated: “I am super-happy because the weekend was not easy but we were calm and worked really well. A second victory in a row is incredible for us and also for the championship it is really good. It was a difficult race because there was more wind than yesterday and I could not make lap times so easy. I have to say thank you to everyone around me because everyone is pushing for me, and everybody watching at home.”

Dorren Loureiro, stated: “That race was definitely so stressful and very, very crazy, especially going into the last lap. We had to catch everyone in the race because were a little bit too far back but I am happy to do it and get my first podium finish.”

Scott Deroue, stated: “I’m so disappointed after a good race, a big moment and a technical problem in the last lap resulting in a P6 finish. Also disappointed that being fastest in the corners doesn’t mean you win the race in WSS300. Next stop Brno and hopefully the luck is on our side.”