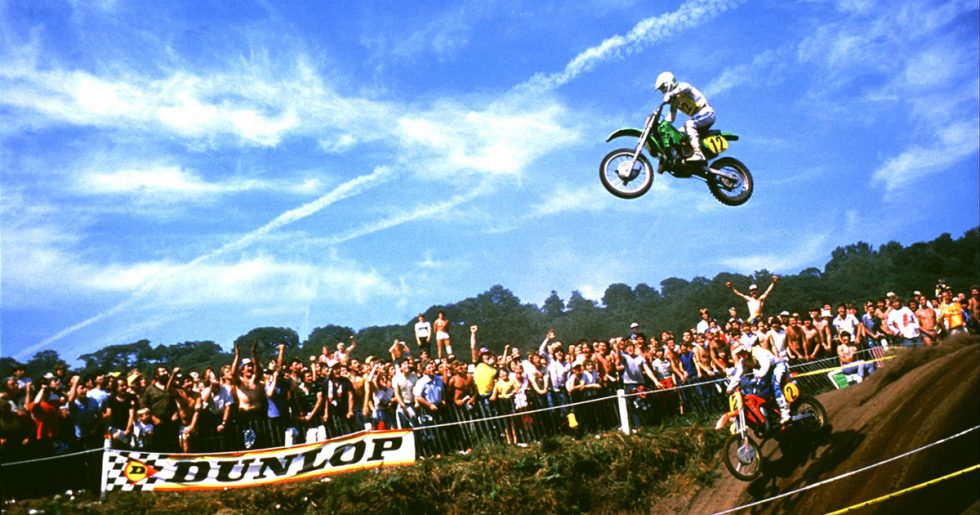 After claiming his second world title in the 250cc class Belgian Georges Jobe chose Kawasaki for his move to the 500cc “Class of Kings” in 1984 … and became an all-time hero with a legendary leap!

In the 1980s there were three motocross world championships but the pinnacle of all ambitions was to contest and win the 500cc series. The 1984 championship gained even greater significance than usual as all three of the previous year’s champions – Swede Hakan Carlqvist, Jobe and fellow Belgian Eric Geboers – would face each other through the twelve-race series, and Jobe, after five seasons and two titles in the 250cc class, reached a deal to race Kawasaki’s flagship, the KX500. The new partnership made a dream start as Georges dominated the first two rounds in Austria and Switzerland to lead the series against his fellow champions and multiple past and future champions André Malherbe and David Thorpe. The battle was intense all summer and, when they came back from North America with three rounds remaining in Great Britain, Belgium and Italy, Malherbe, Geboers and Jobe were in a tight points battle while Thorpe, outdistanced by his rivals after a double DNF in Canada, was on fire for his home GP at Hawkstone Park. The Englishman eventually won both motos whilst Jobe recovered from crashes at the start of each moto to end the day third overall but those present and millions of enthusiasts around the globe will always remember the day for a massive leap by Jobe as he launched past fellow Belgian Malherbe on the exit from the sandpit during the second moto to secure the podium finish which had seemed so distant at the start of the race.

“Hawkstone Park in 1984 was a truly memorable race for me. In 1983, when I was still riding the 250 GPs, we also had a round at Hawkstone Park and already that year I was thinking about trying to jump that enormous leap. But I was leading the championship so I didn’t want to take any risks and I didn’t jump it … but I wanted to do it one day. I ended up winning the 250cc championship that year and when I moved to the 500cc class and I heard we would be racing at Hawkstone Park I knew I would make the jump. I was thinking about it all year, right up until the day we arrived at the track on the race weekend. It was such a big jump but I knew it was possible. It was not a jump you could simply try and achieve; the take-off had a round face and it was not steep so it was not going to be easy, but I knew it could be gone. During training on Saturday every lap I would think about it, come in really hard and get set to jump it, but then at the last moment I would brake and not attempt it. When I came round to the jump on the final lap of practice I stopped before the jump; the spectators knew I wanted to do it, and they started clapping, cheering and shouting “Jobe, Jobe, Jobe”. I decided that I had to do it, and I did; the crowd went wild,” revealed the Belgian after the weekend. “On Sunday during the warm-up Eric Geboers followed me over the jump and he tried to do it too but he broke his leg; he didn’t even break it in the crash, it was just the impact because it was such a big jump. I crashed in both races at the start and I passed so many riders over that jump. I didn’t win but I beat the Hawkstone Park jump and in particular everyone remembers me jumping over my good friend and rival Andre Malherbe.” Dave Thorpe, the winner of the GP, also had good memories from this race and especially of the legendary obstacle, which had never been intended as a jump: “If you ever see the pictures of that race at Hawkstone there were just thousands of people at that part of the track. Nobody expected me to win that day, especially as Georges, Eric and André were all such good sand riders but I did. I won, but it was the day of the iconic image of Georges double-jumping over André. I was fastest in every session but I didn’t attempt the double-jump in the race. When I came back to the paddock from every session everybody was talking about Georges jumping the double and in my mind I was thinking, “I have to jump it too.” So when I came around on the last lap of practice I went out and doubled it. Unbeknownst to me Eric had already broken his leg there just a minute earlier and, as soon as I took off I realised, “I don’t have enough speed.” I got lucky because I came down completely square with that up-face; it gave me a big kick and through no skill of my own I saved it.

Eric on the other hand, had the same thought-process because he hadn’t jumped it either. He tried to jump it but landed a bit further than me; it cart-wheeled him down the track and he broke his leg. But I was three seconds quicker than anyone else in qualification so I knew then that I could win. And I knew that anybody who wins at Hawkstone can win anywhere in the world because the track is so demanding and gets really, really rough.” Dave would also win the final two GPs in Belgium and Italy and the following year won the first of three world titles. Georges Jobe, who tragically passed away after illness in 2012, culminated his first season in the 500cc class with the series silver medal after recording three GP wins and a total of eight GP podiums for Kawasaki, but 1984 will always be remembered for that massive leap at Hawkstone Park on his KX500.