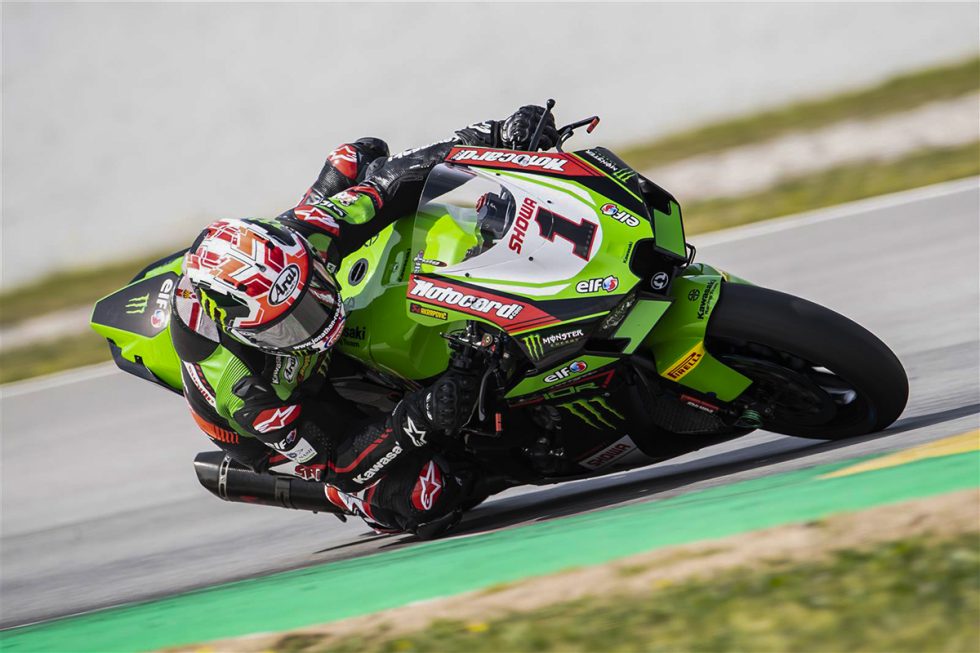 In a private test that also featured just a few or their 2021 rivals from Yamaha, KRT’s WorldSBK technical staff and partners continued to work with Rea and Lowes on the final stages of preparation for round one of the championship, which will take place at Motorland Aragon between 21-23 May.

With a wet track surface a factor on the first morning of the tests on Wednesday the afternoon provided a more consistently dry session. The wet start and the track being recently used by cars – which take different racing lines and leave rubber on the track surface in different places from bikes – combined to provide less than ideal surface conditions but intense work from all involved saw the required programme of work completed for both riders.

As well as making set-up improvements on the new Ninja Lowes confirmed that the after-effects of a recent shoulder injury have been put behind him, feeling much closer to 100% than he did after the previous tests.

Rea only rode in the afternoon of day one but still completed all his testing tasks, including one fast time attack lap at the end, on what is a new model Ninja in road and WorldSBK specification for the 2021 season.

The team will undertake one final pre-season test, again at Motorland Aragon, between 4-5 May. The first round at Motorland, from 21-23 May, will be followed one week later by round two at Estoril in Portugal, making it a busy start to a season that has already been delayed by ongoing restrictions related to the global Covid pandemic.

Jonathan Rea, stated: “The test has been really positive. Even if the track was a little bit ‘green,’ because we had a lot of water on the surface and we had to wait until lunchtime to ride, we were able to confirm a lot of items we tested at Montmelo. The track is different but it also has some similarities, so that means the outcome is positive. These items were mostly chassis related, so it means we could really start to put the package together. I could feel my rhythm was getting better lap-by-lap. We rode a lot on our race set-up, understanding all our potential and starting to really get ready for race weekend in a few weeks. We saw that day two would be wet so we decided to do one time attack at the end of the first day and we were able to be quite fast. We will now move on to more testing before the race. I feel really good with the bike and the team; everybody has been working really hard and I now am excited to get back home and then finish off my preparations.”

Alex Lowes, stated: “Unfortunately, on day two it was raining so we have English weather in Spain! At one stage it looked like both days would have rain but luckily yesterday I did 73 laps and my shoulder felt much better than during the most recent Montmelo tests. This is really positive. From the bike side of things we worked on some corner exit electronics and chassis settings, trying to improve my feeling in this area. It is the same work that we did in Jerez and Montmelo, and we continued that same testing plan in Aragon; it was really positive. I think this is the best I have felt since my first ride on the Ninja ZX-10RR. We have three or four things just to tick off the list before the first race but I am really happy. We did a good job here with the guys so now I am looking forward to chilling out and coming back fresh for the next test.”

Pere Riba, Crew Chief for Jonathan Rea, stated: “On the first morning of this test the track was still a little damp so we decided to only ride in the afternoon and use half a day of testing time, from 1 until 6. There were cars on the track before us and the grip was a little bit strange but we followed the plan and confirmed some things that we had already testing in Portimao and Montmelo. Step-by-step we have been arriving at the starting point for the first race of the season here at Motorland. We did not just focus on a lap times but finally Johnny was happy with the bike and he made a good lap time. His physical condition was good. Of course some more time on track would be good because this year we have not been so lucky with the weather. Everywhere we have been there has been rain on some days, but this is something we cannot control. We will keep working and the next test will be here at Aragon again. I hope we are more lucky with the weather but overall we made all we wanted to at this test and we will keep on building our base and speed from Jonathan.”

Marcel Duinker, Crew Chief for Alex Lowes, stated: “We understood yesterday that the final day would be possibly wet so we did 73 laps and managed to test all the items we had. Of course the opening race weekend is coming closer now so most of the day was spend in preparations for a race weekend. We are very confident because the speed was there, the consistency was there. The bike is performing well, the rider is happy so in the next test it will be a case of fine tuning our preparations for the first round.”