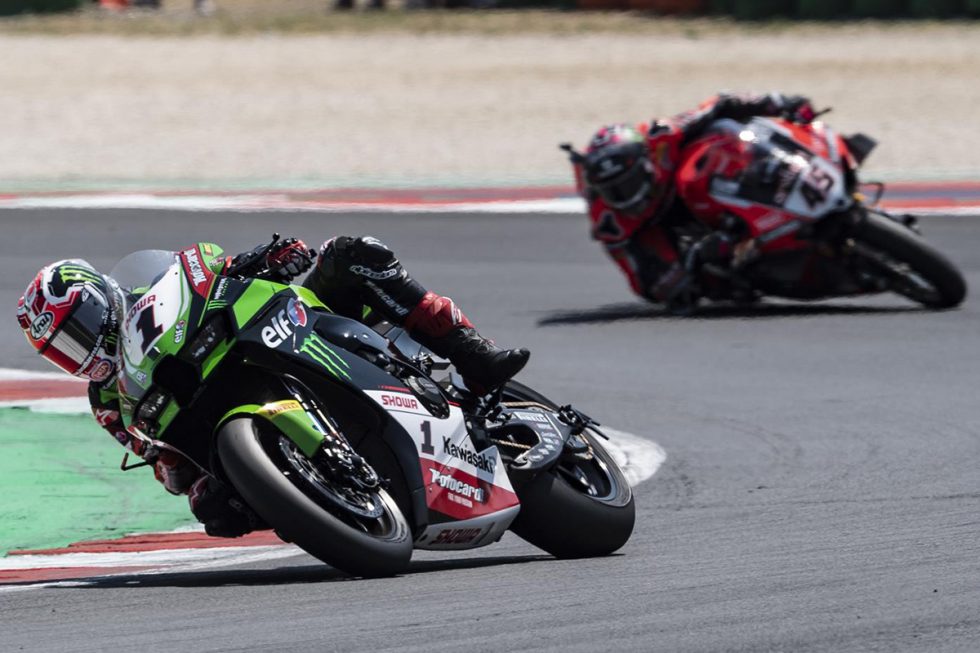 After two final day Misano WorldSBK races Jonathan Rea (KRT) secured another two third places to maintain his leading position in the championship. Alex Lowes took his KRT Ninja ZX-10RR to fifth and then sixth at Misano, as he remains in fourth place overall.

In very hot conditions on the Adriatic coast of Italy Jonathan Rea put in two more fighting podium performances to give him nine top three rides in nine attempts so far this season.

In the ten-lap Tissot Superpole race Rea once again took a third place finish, having been third on day one, and it was a repeat performance from Lowes as well – as he finished fifth in the Superpole Race, just as he had done in Race One on Saturday.

In the final 21-lap WorldSBK race at the 4.226km long circuit Rea was in contention in the early laps and finished in third place yet again, having opted for a different front tyre choice to try and challenge for the race win. His latest podium result sees him sit 20 points ahead of Race Two winner Toprak Razgatlioglu in the overall championship table.

Lowes was looking on course for another fifth place finish in Race Two but he was overhauled in the final laps and was finally ranked sixth, remaining fourth overall in the championship standings.

The WorldSBK riders and teams will now take part in the fourth round of the championship at Donington Park in the UK, between 2-4 July.

Jonathan Rea, stated: “In the second race I went with the ‘C’ rear tyre, the harder option, that I used in Estoril. With the temperature going up on the shoulder of the tyre I was missing a little bit of stability. Then from there I sacrificed a little bit of edge grip. I knew in the beginning I was maybe going to also sacrifice a little bit of turning but as the race went on I felt like I could still keep my brake performance, which I could. I could be in there and fighting to be there, but Toprak had a great rhythm. I was there or thereabouts, fighting like hell. I can’t even remember the short race! I was there at the front for three or four laps but after the warning of a front end slide yesterday I just had to accept my position. Congratulations to Toprak and Michael they had awesome races. I went all-in in Race Two and had some warning but was able to back-it off a little bit and consolidate a podium.”

Alex Lowes, stated: “This weekend we struggled in the hotter conditions to really find the feeling we wanted. In the Superpole Race I felt a little bit better so we made a change for the second race, with the balance of the bike a bit more forward. I thought that after this morning’s experience that was going to be better. But it looks like when the track temperature arrived above 50°C I was really struggling to carry corner speed after maybe six or seven laps. It was a shame because after 12 or 13 laps I could see Garrett Gerloff catching me and I had no chance to battle with him. Misano, in these hot sunny conditions, is a special place. I feel a lot better prepared now for other tracks if we have hot temperatures, as we have more experience on the Kawasaki.”