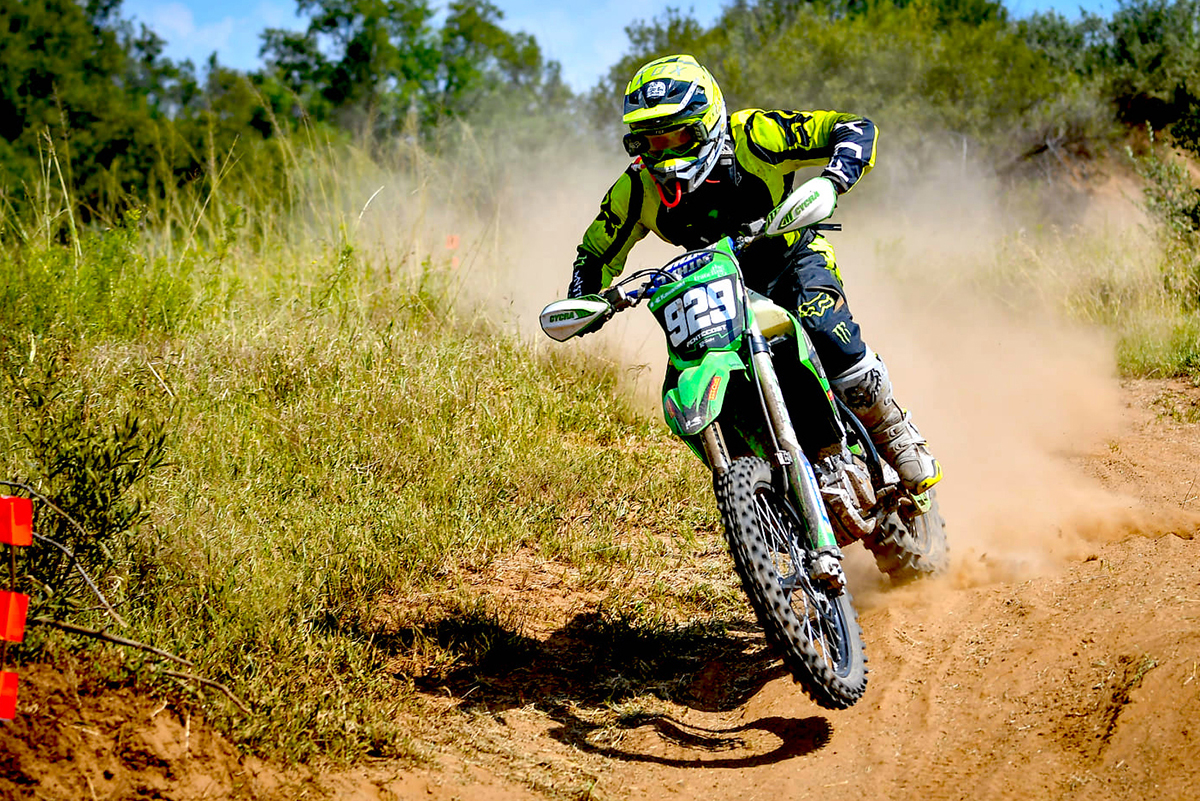 “It was a good day of typical KZN racing on a tight track with lots of rain in the week before,” Mike Pentecost pointed out. “That made the route and the mud holes brutal, so I was surprised to qualify quickest, but it was difficult to open the virgin paths. “I overshot into the cane and had everyone all over me, when I found the only rock in a mowed field and had a monster crash. “Brett Swanepoel stopped to see if I was OK, but I shook myself off and got back on the bike. I was dizzy and disoriented for the two laps until the DSP.

“The team straightened the bike, while my dad and Harry sat with me and helped me regroup. “It was still tough from there — I had to put the pain out of my mind, but I managed to put it all together to take the OR1 win. “So, a good result in a very difficult race on my beast of a Kawasaki KX 450 X. “Thanks so much to my Franchise Co. CIT team, especially Harry who gets right in there to support us, and my winning teammates. “What a day! “Now I must rest and take some physio before the GXCC regional in two weeks. “Can’t wait!” 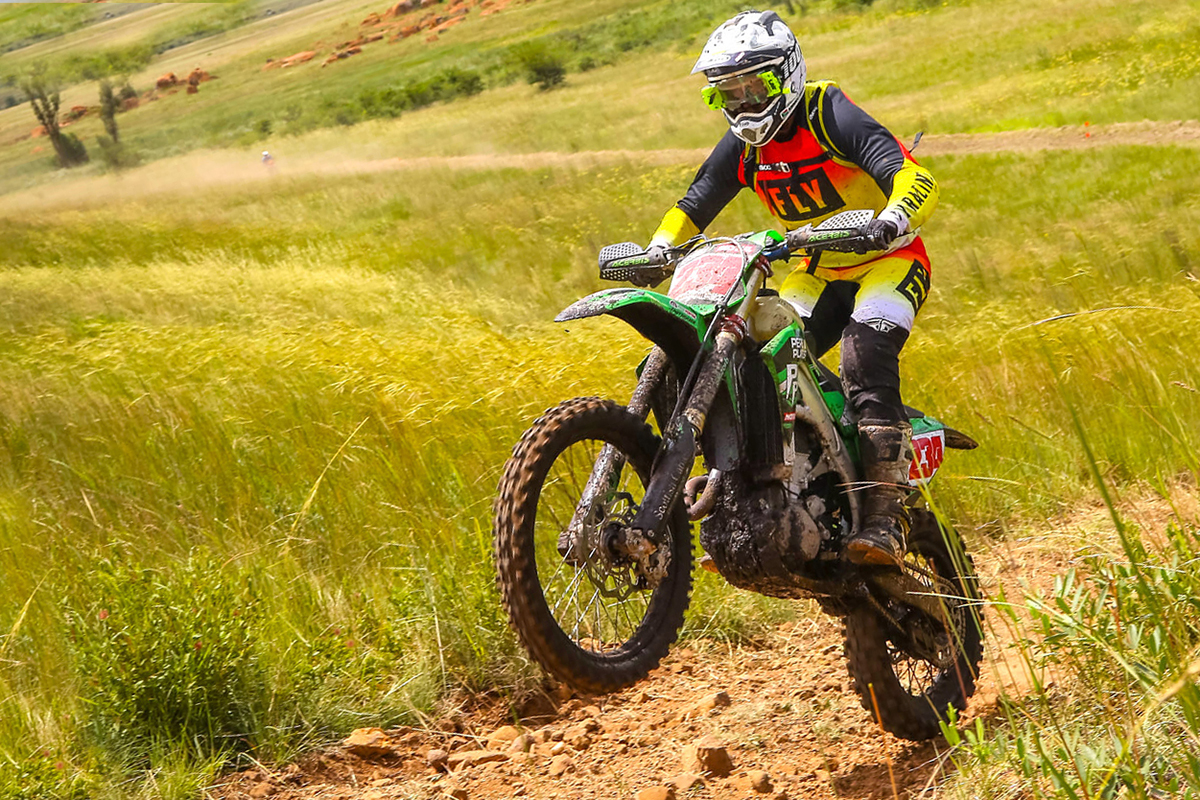 Kenny Gilbert was delighted to add a second straight Seniors win with a strong ride to 12th overall on his Pepson Plastics Motul Kawasaki KX 450 X racing with Scottish Cables. “Dalton was a really tough track but huge fun, safe and really well marked. “It rained the night before, which made it even trickier, so I rode well within my limits and had a really good day out. “Well done to the organisers, my winning teammates and to everyone who finished the race. “And thanks to the team for a great effort as usual.”

“Dalton was tough with the track getting slicker and more challenging as the laps continued,” motocross convert Wyatt Avis explained. “Once again I learnt so much about Cross Country and made more steps forward since round 1. “We need a different mindset for this type of racing and I’m really enjoying the changes I am bringing about to both my mental approach and physical preparation. “I cannot thank the team enough for this incredible understanding and support in helping me improve race by race.”

Taki Bogiages was happy with another good points haul in OR3. “My race was really good, I enjoyed it and rode well,” Taki admitted. “My elbow did catch up with me on those severe climbs and descents so my pace wasn’t entirely there, but I made a few positive steps in the right direction and we will keep hunting. “I must say a special thank you to my Pepson Plastics Kawasaki Motul team, they gave me an awesome Kawasaki KX 250 X that excelled in really tough conditions, although it was good to race without any dust for once.” 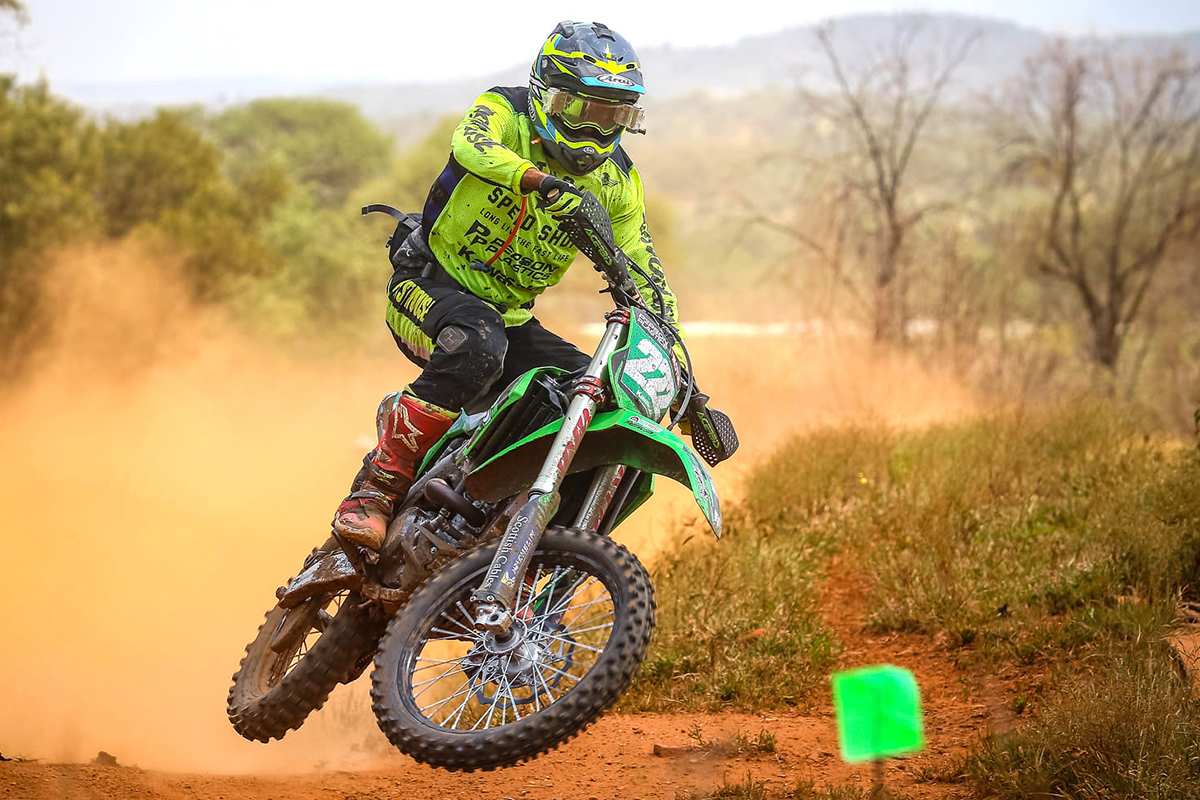 “That’s how we do it” Franchise Co. CIT team boss Harry Grobler wrapped it up. “Triple Gold — well done to the entire team.” Pepson Plastics Kawasaki Motul Racing with Scottish Cables team principal concluded: “Best of all is that we now move on to familiar territory in the North West. “That’s the sort of terrain we thrive on, so bring it on!”